Remember how awesome being a kid was? I mean, who doesn’t miss PB&J’s for lunch, not caring about getting covered in sand at the beach, and taking naps literally every afternoon? Not to mention you didn’t have bills to pay or relationship problems. All dudes had cooties – which I’m beginning to think it’s still kinda true…

I digress. Boston Children’s Museum realized this nostalgia exhibited by adults in Boston, so they created a Grown Up night for anyone over 21 (with a ticket) to explore the museum and its exhibits sans the kiddos. Of course I’m going to jump on that. Morgan, Katherine, Rosie and I met a couple friends here this Wednesday night to learn about natural defense mechanisms of plants and animals, finger painting, comparing my 5’3″ to Shaq’s 7′ frame, and supermarkets in Cape Verde. All while drinking Harpoon. Talk about an exciting night! Here are some pics from the Boston Children’s Museum Facebook event (as I didn’t take any for myself) 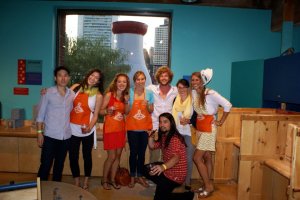 Learning how to use a screwdriver

Disclaimer to that photo: we were just in the arts and crafts room where a collaborative paper plate sculpture was being made. Hence Katherine’s brilliant fascinator 🙂 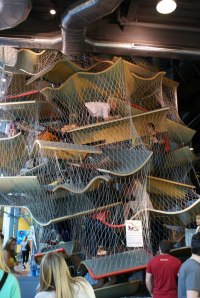 Note to self: don’t climb this in a dress. 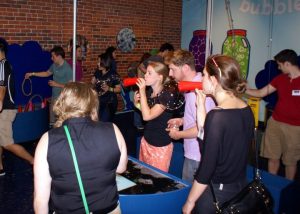 Bubbles can entertain people of all ages

There were so many rooms, so unfortunately we couldn’t make it to each one in the 3 hour time slot. Too. Much. Stimulation. Over 800 people attended – what a success! Thanks Boston Children’s Museum! Let’s do more of these nights 🙂 mostly because I didn’t get to the shadow room and I hear it’s a hoot!

Tonight, I explored another part of childhood – the part in the womb. My “sister-in-law” is having a little babe in October, so Meg put together a lovely baby shower for her. Since this was my first rodeo, I only had an idea of what a stereotypical baby shower consisted of – little food, baby games, and opening of gifts, along with a lot of advice. That’s pretty much how it went! There were little baby turkey burger sliders, a potato salad with little baby purple taters, quiche, arugula salad (my favorite stuff ever), and tomatoes with FRESH mozz and basil. Obviously, what baby shower would be complete without cupcakes? They were there too. The food was amazing – thanks Meg! We played a game about Carrie as a kid, and I definitely owned that. Then Carrie opened gifts. This was a reasonably sized party – only about 10 people – so it wasn’t too much to watch her unwrap the good stuff. There is a lot to know when having a baby. How can anyone feel prepared?? Needless to say, I learned a lot and heard a lot of stories. We even had a prediction chart about the sex, weight, and date of the arrival. Fingers crossed for a girl on Oct. 20 weighing 8lbs! Congrats, Carrie! Can’t wait to meet the bump 🙂

All this talk about childhood makes me want to go back, but also excited for the future because there is so much still ahead for me. Being a kid was undoubtably awesome, but now I have even cooler stuff to look forward to – going to grad school, traveling, falling in love and making a family of my own someday. I want to take advantage of the time I have and my youth, because truthfully, it only comes once. No matter how many times I may go to the Boston Children’s Museum 🙂